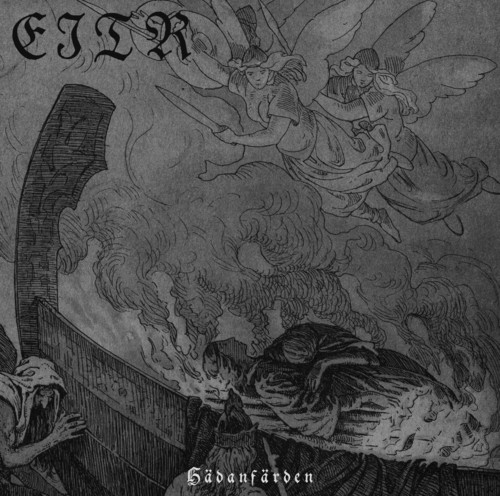 Vinyl LP pressing. 2018 release. Eitr is the new brainchild of Nachtzeit, the man behind ambient dark metal project Lustre. Representing the first recording of this new adventure, HĂ¤danfĂ¤rden takes us back to the time of the Norse gods and the death of Balder, masterminded by the ever-devious Loki. As the waves of mischievous, playful synth wash over our senses we are transported to Asgard and any misgivings over the potential of an album without lyrics to tell a story are dispelled. Are we now Loki or merely observers in his game of trickery and cunning? HĂ¤danfĂ¤rden could just be the album we all wished Daudi Baldrs could have been. We take the form of the old woman with Loki as he tricks Friggr into telling him the one substance that can harm Balder. We feel the breeze and air of expectation as he strides with the branch of the little mistletoe bush back to the hall in Galdsheim. The contrast between the air of joviality of the masses and the dark, conniving nature of Loki is tangible and the theatre of it all captured in simple sonic form. There is ancient magic at play here, no doubt. The spirit of the Norse gods and their tales is alive and well in Eitr's softly lilting music - lulling us, a la Loki into a false sense of peace and security. All the while Balder is imprisoned by Hel, aided by the cave-dwelling giantess Thokk, or should we say... Loki.
back to top