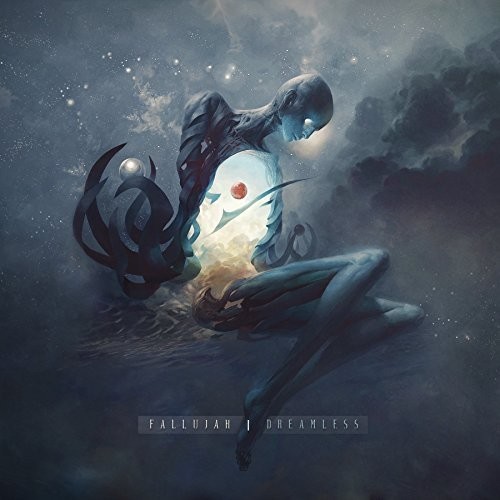 2016 album from the Bay Area metal band. From Fallujah's formation in 2007, the San Franciscans have melded brutality and brains into a sonic force with an unquestionable presence. The debut album, The Harvest Wombs, set the tech death world afire, with it's smart brawn and well-placed jazz-rock interludes. The group's follow-up album, The Flesh Prevails, further contrasted intensity with atmosphere. Fallujah, however, aren't content to be pigeonholed as tech death (or deathcore). Eager to not repeat The Flesh Prevails, Fallujah set out to write a paradigm shift on Dreamless. Written largely by guitarist Scott Carstairs at his home, Dreamless represents a band at the peak of their songwriting ability. According to Hoffman, songs like 'The Void Alone', 'Face Of Death', and 'Lacuna' feature less musical arithmetic and more groove, a trait that's underscored throughout Dreamless. Dreamless was produced at Sharkbite Studios (Exodus, High On Fire) with Zack Ohren again at the helm. Having produced both The Harvest Wombs and The Flesh Prevails, Ohren made it easy for Fallujah to return. The relationship between Fallujah and Ohren is closer to brotherhood than hired studio gun. He knows how Fallujah work as a team, and how to get the best out of individual performances. He's both taskmaster and cherished mentor. Plus, Ohren's a true gearhead, something Hofmann cherished while cutting tracks for Dreamless.
back to top