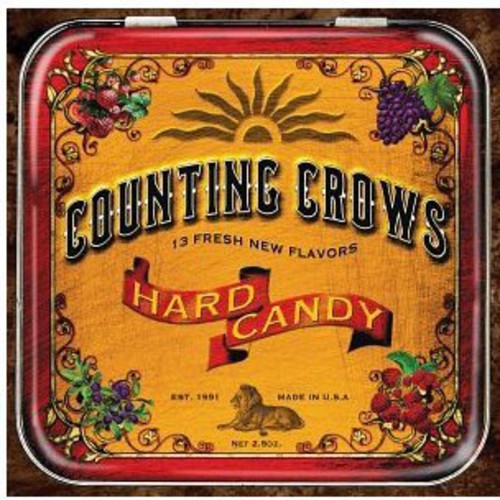 The Counting Crows return with their 5th album, Hard Candy! This album ventures into newer territory of pop and whimsical musical arrangements. The heart and soul of the band is still intact and they are better than ever. Produced by Steve Lillywhite with Ethan Jones and featuring guest performances by Matthew Sweet, Leona Naess, Ryan Adams and Sheryl Crow. First single: "American Girls" (featured in the the Coca-Cola ad).

''Hard Candy'' is the fourth studio album by Counting Crows, released in the United Kingdom on June 7, 2002 and the following day in the United States.

The album features the hidden track "Big Yellow Taxi", a Joni Mitchell cover. This was one of their biggest radio hits from the album, however, re-releases of the album were revised to mention the song. Originally the song did not include Vanessa Carlton and the standard version caught the ear of a producer who added it to the movie ''Two Weeks Notice'' adding Carlton's voice to the track. This version topped the VH-1 charts and American Top 40 for a while. A new version of the song "Holiday in Spain", recorded as a duet in two languages, turning into a "round" before the final choruses with the dutch band BLØF, became a #1 hit in the Netherlands. - Wikipedia

When Counting Crows frontman Adam Duritz declared that "I wanna be Bob Dylan"on the group's first hit, "Mr. Jones," he threw down a pretty formidablegauntlet-and one that's been used to smack the band around far morethan is necessary. The fact is that Duritz and company have made consistentlyoutstanding albums informed by ambitious songcraft and musicality and resultingin richly drawn and played tunes that straddle a line between The Band'spast and R.E.M.'s present-which is a compliment. It's timelessstuff, in other words, and Hard Candy, Counting Crows' fifth outing,more than lives up to its predecessors' creative achievements.

And it's no light endeavor, despite what the title might imply. But producerSteve Lillywhite (U2, Dave Matthews Band) has drawn out of Duritz and companya somewhat more focused and direct performance that has a more potent punch, particularlyon rocking fare such as the title track and the new wavey bop of "New Frontier.""American Girls," with Sheryl Crow providing counterpoint vocals, isdriven by a wiggly guitar signature, and "If I Could Give All My Love (RichardManuel is Dead)" starts like the Dead's "Casey Jones" andretains a rootsy kind of feel throughout. But with the perpetually lovelorn Duritzcontinuing his quest for attainment and fulfillment-"If I could giveall my love to you/ I could justify myself/ But I'm just not coming through"he sings at one point-Hard Candy's real stock in trade is lusher, fullydrawn opuses like "Good Time," "Goodnight LA," "Butterflyin Reverse" and "Up All Night (Frankie Miller Goes to Hollywood),"which couch the singer's angst amidst carefully crafted arrangements andgently swelling dynamics. "Mr. Jones," and Mr. Duritz, can be assuredthat Counting Crows are proceeding apace, and in definably forward motion.