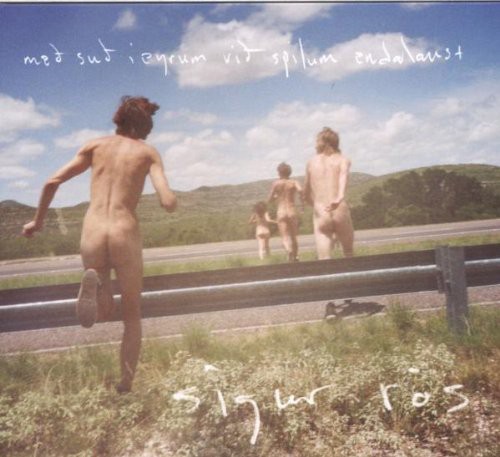 Med Sud I Eyrum Vid Spilum Endalaust was co-produced with the band by renowned producer Flood, and was recorded in New York City (at Sear Sound Studios), London (at Assault and Battery Studios and Abbey Road), Reykjav k (at Alafoss, the band's studio, as well as a church in Reykjav k), and Havana, Cuba. Whereas Sigur Ros' last release - the critically-acclaimed documentary Heima, chronicling their free tour throughout Iceland - took the band to their homeland, their newest creation, Me su eyrum. Is the first album in the band's career to be made outside of Iceland. It is also their first album to feature vocalist Jon "Jonsi" Thor Birgisson's vocals in English on one track (the remainder are sung in Icelandic). Inspired by the unfettered feeling of the acoustic performances filmed during Heima, Sigur Ros decided to adopt a looser approach in the writing and creation of their brilliant fifth album. The material for the album was written, recorded and mixed entirely in 2008 and is being released just one month after it's completion. The album glows with the perfect imperfection of live takes, the sounds of fingers playing guitar strings, cracked notes, and a stark, upfront presence not found in previous Sigur R's recordings, moving away from reverb-soaked guitar sounds towards something altogether more affecting. The record also contains some of the most joyous music the band has ever recorded. Opener "Gobbledigook" sets the tone with it's shifting acoustic guitars, playful vocals, time signature swings and swirling percussion, while "Inni mer syngur vitleysingur" ("Within me a lunatic sings") sparkles as one of the most anthemic songs Sigur Ros have ever written. "Festival" is epic in it's elation and scope, "Illgresi" features one of Jonsi's finest vocal melodies over a lone acoustic guitar, and "Ara batur" is the largest musical undertaking in the band's career, as it was recorded live in one take with the London Sinfonietta and London Oratory Boy's Choir, a total of 90 people playing at the same time. The band also utilized the talents of their string-quartet friends Amiina, as well as a five-piece brass section on certain tracks, in addition to introducing the Mellotron into their writing/recording process for the first time on this album, highlighted on one of the most tender and beautiful songs on the record, "Fljotav k". The spirit of Med Sud I Eyrum Vid Spilum Endalaust is best captured by the album's stunning artwork, contributed by acclaimed visual artist Ryan McGinley. McGinley first met the band when he photographed Jonsi six years ago; the album cover was taken from a flyer for McGinley's most recent exhibit, "I Know Where the Summer Goes," which happened to find it's way into Jonsi's inbox just as the band was deciding on how to best visually represent their new collection of songs. The result is a perfect synergy of the aural and the visual.
back to top